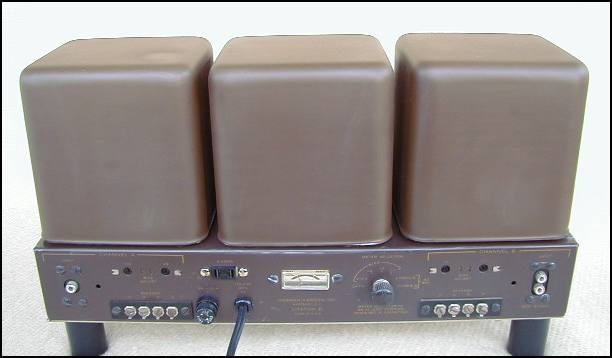 Important! Before applying power, rotate all four bias adjust controls to the full clockwise position (as viewed from the back of the amp). Full clockwise is
the minimum bias position.

Allow the amp to warm up for one minute and rotate the bias selector switch to the V10 position. IF ANY OF THE OUTPUT TUBES BEGIN TO
GLOW CHERRY RED IMMEDIATELY DISCONNECT THE AC LINE CORD AND INSPECT THE AMPLIFIER FOR TROUBLE.
The output tubes should show no red color during their normal operation or during testing. The meter should deflect upscale, but should be well below the
"BIAS" mark. Switch through V9, V8, and V7 positions and the readings should be similar.

NOTE! IF THE METER DEFLECTS BEYOND THE "BIAS" MARK OR IF THERE IS NO DEFLECTION AT ALL DISCONNECT
THE POWER AND CHECK YOUR WIRING!

DC BIAS: Allow the amplifier to warm for an additional 20-30 minutes. The bias adjustment must be done without an input signal feeding into the amp. It
is best to short the inputs to ensure no stray signal pick up.

1. Set the meter switch located on the rear panel to the V10 position.

2. Adjust the V10 bias potentiometer until the pointer is exactly at the bias mark.

4. Keep a constant check on the bias meter reading for each tube for the next 45-60 minutes.

5. Rotate the selector switch through the V10 through V7 positions and check the meter readings. Readjust if necessary until the readings are stable, and
set at the bias mark.

This sets your output tube bias at the factory setting of 100 ma. per tube. To prolong tube life I recommend the following bias settings:

For all other output tubes: 75 ma.

Tip: The stock Citation II stands the cathode of the output tubes on 15 ohm resistors. If you'd like to reduce the bias current and still use the
stock bias meter setting procedure, replace the stock value with:

This assumes an approximately 460 volt plate supply. Specifications call for 450 volts on the plate, but with today's higher AC line voltages
460-470 volts is not uncommomn. See the Citation Modifications Page for detailed instructions on how to do it.

Can't get enough bias (the needle won't go far enough to the right to reach the bias mark)?

You probably have a high resistance ground in the bias pot circuit. The circuit grounds through R26 and R61, the 5.6K resistors soldered on each
channel's dual bias pot. (Need a schematic? Click on the link to my "Resources" page below.) The ground point for the 5.6K resistors is one
of the screws that holds the 4 screw speaker terminal strip in place. Look for a solder terminal strip inside the chassis at the rear that is mounted to
the chassis by one of those screws, and you'll find the above mentioned resistors soldered to it. The screws holding the strips are usually black
colored, and those screws are what ground the 5.6K resistors. Well, at least they used to ground them...

Corrosion can build up on the screws and prevent a good ground. If you measure from the bias pot end of a 5.6K resistor to chassis ground you
often find much more than 5.6K! This reduces the adjustment range of the pots, and prevents proper adjustment, especially with older tubes
installed in the amp.

So take the screws, lock washers, and nuts apart, wire brush them off (especially the threads), clean the area on the back panel of the chassis where
they mount with some DeOxit or similar product, then re-install and tighten them securely. After that, you should be able to measure the correct
resistance to chassis ground, 5600 ohms +/- 20%.

6/04 Update - I now recommend you replace R26/R61 with 4.7 or 4.75K .5 watt resistors. This allows a wider adjustment range where it will
do the most good. Without this change it still may not be possible to get enough adjustment range to allow use of cooler bias tubes, or allow
full adjustment with "normal" AC line voltage. New resistors are now included in my basic power supply kit.

Very Important!! Be sure to rotate all four bias adjust controls to the full clockwise position (as viewed from the back of the amp) before you fire
it back up, as the bias will need to be completely reset after the ground is properly re-established.

AC BALANCE: Be sure your loudspeakers are not connected during this test, as they could be damaged.

1. Connect a 16 ohm, 20 watt (or higher wattage) resistor between terminals marked "G" and "16" on the channel A speaker terminal strip. Note: you
can use an 8 ohm 20 watt resistor, just hook it to the 8 ohm terminal instead of the 16 ohm. Using a standard phono shielded patch interconnect cord,
connect the 60 Hz test signal from the Test Signal jack to the channel A input jack. To avoid overheating the resistor, prolonged testing should be avoided.

3. Remove the phono patch cord from channel A input and connect to channel B input. Move the resistor to terminals "G" and "16" (or 8, if using an 8 ohm
resistor) on the channel B speaker terminal strip. (NOTE: The resistor will be quite hot. You may wish to let it cool a few minutes.)

4. Repeat step 2 for channel B AC balance. The channel B control is between V7 and V8.

Turn the meter selector switch to the off position and disconnect the AC line from power. Remove the patch cord and resistor (it may be HOT!)

Tip: The meter pointer may not rest exactly at the AC balance mark with the meter off. For optimum results note where the needle sits at rest,
and adjust the AC balance to that needle position. Also, only a small amount of needle movement is normal even if you turn the pot from
stop to stop. You won't see large swings like with the bias adjustment.

Don't forget, adjust DC bias first! Be sure the meter switch is turned off when finished.

It's really pretty simple. What you are looking for is 1.5 volts DC measured from tube pin 8 to ground. This voltage is developed by 100 ma. bias current
flowing through the 15 ohm cathode resistor from pin 8 to ground. So allow the amplifier to warm for 15-30 minutes. The bias adjustment must be done
without an input signal feeding into the amp. It is best to short the inputs to ensure no stray signal pick up.

1. CAREFULLY measure the voltage to ground from pin 8 on each power tube, and adjust each bias pot to set the bias to 1.5 volts. This sets your output
tube bias at the factory setting of 100 ma. per tube. But to prolong tube life (with no sonic penalty!) I recommend the following bias settings:

2. Keep a constant check on the bias voltage reading for each tube for the next 45-60 minutes. Then you're set!

Tip: If the selector switch is working, put the positive voltmeter probe on the bias meter + terminal (usually this is a red wire) and the other probe
to ground to measure the voltages mentioned above. Just rotate the selector switch and you can read each tube much more easily than trying to
get a probe down near the tube sockets. It's quite crowded, and a slip can be disastrous!

Voltage specs are DC, except as noted. All measurements are referenced to ground. Variations of 10-20% in the readings can usually be considered
normal, and some are very 12BY7A tube dependent. Also, if you have installed my Surge Limiter kit, use the stock voltage chart. The limiters reduce
the AC voltage back to near "normal".

* These voltages can and should vary with the individual bias pot settings. They will not normally be equal.

# These voltages will usually be different due to differences in tube balance/current draw. This is normal.

My sincere thanks to Norm Thagard for his assistance in understanding some of the unusual readings you find in a Citation II. (Hint - look at the biasing
voltages on V2, V3, V5, V6. Whassup wid dat??)

To Citation Modifications Page To Citation Resources Page (under construction)